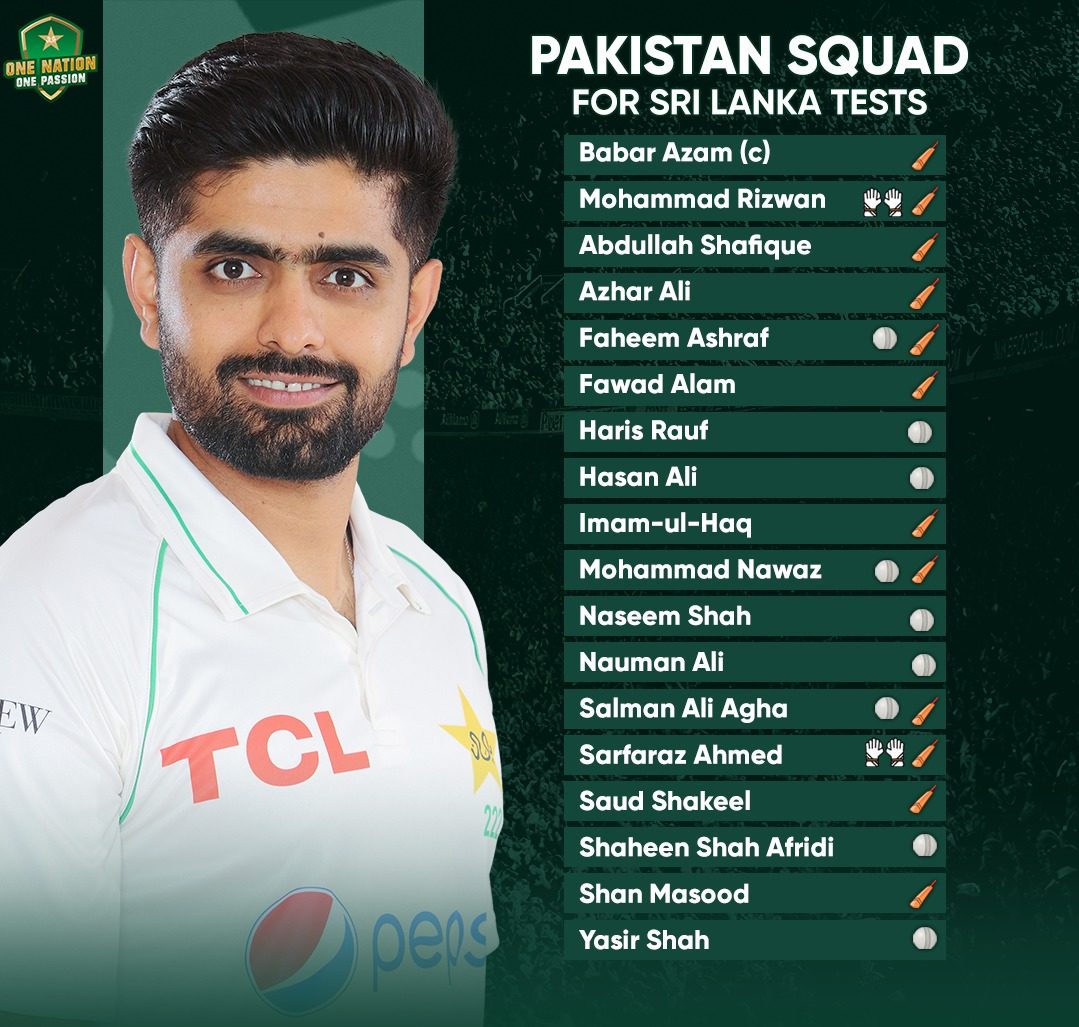 • Muhammad Wasim: “We have selected this squad considering the conditions in Sri Lanka and have equipped the squad with the best possible resources”

Leg-spinner Yasir Shah marks his return to the national men’s side as chief selector Muhammad Wasim today announced an 18-member squad for next month’s two-match Test series against Sri Lanka.

Yasir was instrumental in Pakistan’s 2-1 victory over Sri Lanka on their last tour of the island in 2015, snaring 24 wickets at 19.33. He comes back into the side after regaining full fitness. Yasir played his 46th and last Test, to date, against the West Indies in August 2021.

Salman Ali Agha, who has scored 4,224 runs and taken 88 wickets in first-class, is another addition to the squad.

Mohammad Nawaz is the third player to be recalled. He was named in the squad for Australia Tests but was withdrawn due to injury.

Chief selector Muhammad Wasim: “We have selected this squad considering the conditions in Sri Lanka and have equipped the team with the best possible resources.

“Our spin department is boosted with the return of Yasir Shah, who proved himself as a match-winner in Sri Lanka on our last tour and Sajid Khan has made the way for him. The spin department also includes two spin all-rounders in Mohammad Nawaz and Salman Ali Agha and left-arm orthodox Nauman Ali..

“Salman Ali Agha has shown consistent performances with the bat in the past three seasons and he is a handy off-spin option.

“Our team has recently put strong performances in Bangladesh and although results against Australia were not ideal we displayed solid cricket and for that reason we have retained the core to instill consistency and continuity and have trimmed the squad size following the relaxation in Covid-19-induced travel restrictions.

“These two matches are extremely crucial for our side as we have World Test Championship points at stake. I wish our boys all the best and I am sure they will make us proud.”

Babar Azam’s side will converge in Islamabad on 25 June to finalize their preparations for the Test series at the Pindi Cricket Stadium with a seven-day camp that stretches from 26 June to 2 July before departing for Sri Lanka on 6 July.

Pakistan will play a three-day warm-up match between 11-13 July. The first Test will be played at Galle from 16 July, while the second Test will be staged at Colombo from 24 July.

For Pakistan, who are on the fifth spot, this series is their final away commitment of the current ICC World Test Championship cycle, which stretches from July 2021 to June 2023, and they will be eager to improve their position on the table by repeating the same result as last time with a series win.

Pakistan have played three series in the current cycle and with wins in three Tests and two draws are ranked fifth in the nine-team table.

Babar Azam’s men levelled the two-Test series in the West Indies, defeated Bangladesh 2-0 in their second away assignment before Australia edged out with a 1-0 victory in Pat Cummins’ side’s historic tour of the country.

In the upcoming 2022-23, Pakistan are set to host England and New Zealand for three and two Tests in a bumper home international season.