Sacchi said, ‘Messi, who came out of Maradona’s shadow with the World Cup victory:

1994 runner-up Arrigo Sacchi says Lionel Messi has stepped out of the shadow of fellow Argentinian ‘phenomena’ Diego Maradona as he leads his country to World Cup glory.

The seven-time Ballon d’Or winner scored twice from the penalty spot in Sunday’s final against France, captaining Albiceleste to their first trophy since Maradona in 1986. 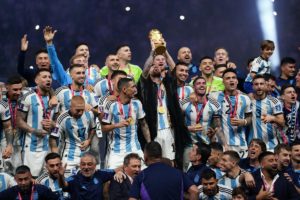 In the 1980s, when Milan’s great team battled Maradona’s Napoli, Sacchi refused to compare the two Argentine greats, but was delighted to see Messi replicate the success of his compatriots.

“When Messi raised the World Cup to the sky, his eyes were wet with tears,” Sacchi, who led Italy to the final in 1994, wrote in La Gazzetta dello Sport.

“I thought of Leo’s entire journey, of what he won with Barcelona, of his dribbling, of his goals, of his acrobatics, of the many Ballon d’Ors he placed on the bulletin board.

“Then, however, there was that sort of curse which he could not shrug off. Too often he was forced to play with the shadow of Maradona weighing on his shoulders.

“Too often they asked him what he could not give, and then he felt sad. He felt the responsibility to give happiness to an entire people and the fact of not succeeding in it pained him.

“Now all of Argentina is at his feet. I don’t feel like saying whether or not he has reached Maradona’s level.

“I don’t agree with these comparisons between champions who belong to different eras of football.

“What I know is that Maradona was a phenomenon, and I knew him well, and I know that Messi is too, albeit in a different way.”